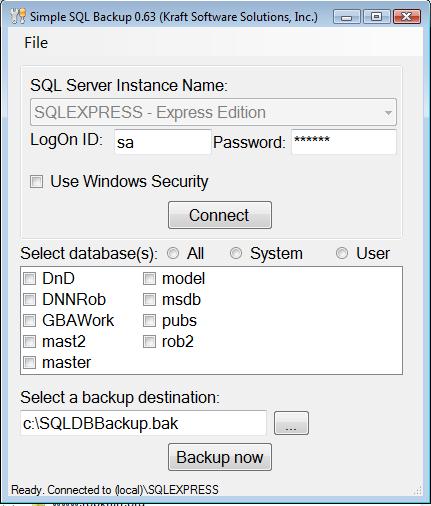 Version 0.66 is currently available on this site. Download version 0.66 by clicking here.

Simple SQL Backup was rated 100% clean by www.softpedia.com and can be downloaded from their site at this link: download from softpedia

The original release was version .51.

Version .52 fixed a bug connecting to the default instance (MSSQLSERVER).

Version .62 fixed a bug connecting to some installations of SQL Server 2000.

Version .63 allows you to backup multiple databases into one backup file. .63 can store the database logon and password in encrypted form in the registry. .63 also includes an installer.

Version .65 Fixed a bug that occurs if you attempt to restore from a multi database backup file but do not select the specific database to restore.

Version .65 Will retain the resizing of your backup form.

Version .66 Fix error if a path supplied ends with \ and "backup to seperate files" and more than one db chosen to backup up

Version .66 Fix - checking the System DBs or User DBs checkbox did not enable the "Backup to single file" and "Backup to separate files" options

Version .66 changed from 10 minutes to 30 minutes on restore and move

Version .66 The program will warn you if you are working with a database that is not using the Simple recovery mode. You can disable this warning in options.

Version .66 Fix - If you have multiple SQL Server instances, you may see a list of databases from the wrong instance

Version .66 ENH - The program allows searching for SQL Servers on the computer if the SQL Server is not found in the registry.

Future versions of the program may include:

If you would like to be notified of updates to this program, or when related programs are available, please provide $1.99 payment by clicking on the button below.

This software is provided by Kraft Software Solutions, Inc.

For product suggestions, feedback, or support: